You can now have your income taxes done by a professional – and never have to leave the comfort of your home.

We get it. You’re busy. You’re playing things safe. Coming to see us is not in your top five of exciting things to do.

That’s ok. We’re not offended and we have options now that take full advantage of the innovative improvements in technology that the last two years has brought about. Our heavily encrypted customer portal is a great new way to connect and conduct business. Now in our second year of virtual offerings, we are proud to offer our two different virtual options – The AFS Taxsavers Virtual Appointment and Virtual Drop-Off.

With both of our virtual offerings, the process starts with a creation of your profile in our protected and secure customer portal. It is here that you will upload your tax documents to your Tax Professional. Once we’ve received all of your documents, your tax return is prepared and we set up a Virtual Appointment to review the results of your tax return via a Video Call. All documents are then signed electronically and payments are made without ever having to come into the office. Copies of your tax return are loaded into your secure portal, where you can print or download for your records.

Everything with the Virtual Drop-Off is the same as the Virtual Appointment, minus the Video Appointment. You first upload your documents to your Tax Professional. Your Tax Professional prepares and completes your tax return and you are notified when they are ready. Through your secure portal, you sign your documents and provide payment to AFS Taxsavers. Copies of your return are then available for you to print or download for your records.

We are so excited to be able offer this convenient way to interact with us and get your tax return checked off your to-do list – all without having to even pick up the phone or come in for an appointment. This method addresses your needs for privacy, security, speed, and flexibility with your busy calendar, and we know you will be more than satisfied.

Click the “Create Your Secure Online Profile Now” link above and let’s get started! Your tax return results are just a few days away!

Changes have been made to the employee retention credit due to the Taxpayer Certainty and Disaster Tax Relief Act of 2020. Find out if you can take advantage of these changes. 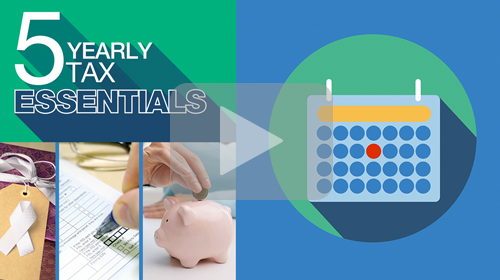 My accountant says my state income tax refund from last year is taxable. Is this possible? H.C., Middlesex, N.J.

Yes. If you claimed state income taxes as an itemized deduction on Schedule A of your 2015 Form 1040, any refund you received in 2016 from the state counts as taxable income on your 2016 return. In essence, you can’t have things both ways if you deducted the full amount that you paid. However, in other cases, the refund isn’t taxable. For instance, this rule doesn’t apply if you deducted state sales taxes instead of income taxes on your 2015 return.

Tip: There’s no tax on a refund received for a year for which you claimed the standard deduction.

Farms include ranches, ranges and orchards. Some raise livestock, poultry or fish. Others grow fruits or vegetables. Individuals report their farm income on Schedule F, Profit or Loss from Farming. If you own a farm, here are some tips to help at tax time:

Crop insurance.  Insurance payments from crop damage count as income. Generally, you should report these payments in the year you get them.

Sale of items purchased for resale.  If you sold livestock or items that you bought for resale, you must report the sale. Your profit or loss is the difference between your selling price and your basis in the item. Basis is usually the cost of the item. Your cost may also include other amounts you paid such as sales tax and freight.

Weather-related sales.  Bad weather such as a drought or flood may force you to sell more livestock than you normally would in a year. If so, you may be able to delay reporting a gain from the sale of the extra animals.

Employee wages.  You can deduct reasonable wages you paid to your farm’s full and part-time workers. You must withhold Social Security, Medicare and income taxes from their wages.

Net operating losses.  If your expenses are more than income for the year, you may have a net operating loss. You can carry that loss over to other years and deduct it. You may get a refund of part or all of the income tax you paid in prior years. You may also be able to lower your tax in future years.

When you give a gift to charity that helps the lives of others in need. It may also help you at tax time. You may be able to claim the gift as a deduction that may lower your tax. Here are eight tax tips you should know about deducting your gifts to charity:

Qualified Charities.  You must donate to a qualified charity if you want to deduct the gift. You can’t deduct gifts to individuals, political organizations or candidates. To check the status of a charity, use the IRS Select Check tool.

Itemized Deduction.  To deduct your contributions, you must file Form 1040 and itemize deductions.

Benefit in Return.  If you get something in return for your donation, your deduction is limited. You can only deduct the amount of your gift that is more than the value of what you got in return. Examples of benefits include merchandise, meals, tickets to an event or other goods and services.

Donated Property.  If you gave property instead of cash, the deduction is usually that item’s fair market value. Fair market value is generally the price you would get if you sold the property on the open market.

Clothing and Household Items.  Used clothing and household items must be in at least good condition to be deductible in most cases. Special rules apply to cars, boats and other types of property donations.

Form 8283.  You must file Form 8283, Noncash Charitable Contributions, if your deduction for all noncash gifts is more than $500 for the year.

Records to Keep.  You must keep records to prove the amount of the contributions you made during the year. The kind of records you must keep depends on the amount and type of your donation. For example, you must have a written record of any cash you donate, regardless of the amount, in order to claim a deduction. For more about what records to keep refer to Publication 526.

Donations of $250 or More.  To claim a deduction for donated cash or goods of $250 or more, you must have a written statement from the charity. It must show the amount of the donation and a description of any property given. It must also say whether the organization provided any goods or services in exchange for the gift.

If you paid for work-related expenses out of your own pocket, you may be able to deduct those costs. In most cases, you claim allowable expenses on Schedule A, Itemized Deductions. Here are some tips that you should know about this deduction.

Expense Examples.  Some costs that you may be able to deduct include:

This list is not all-inclusive. Special rules apply if your employer reimbursed you for your expenses.

Forms to Use.  In most cases you report your expenses on Form 2106. After you figure your allowable expenses, you then list the total on Schedule A as a miscellaneous deduction. You can deduct the amount that is more than two percent of your adjusted gross income.

Educator Expenses.  If you are a K through 12 teacher or educator, you may be able to deduct up to $250 of certain expenses you paid for in 2014. These may include books, supplies, equipment, and other materials used in the classroom. You claim this deduction as an adjustment on your tax return, rather than as an itemized deduction. This deduction had expired at the end of 2013. A recent tax law extended it for one year, through Dec. 31, 2014.

Keep Records.  You must keep records to prove the expenses you deduct. For what records to keep, see Publication 17, Your Federal Income Tax.